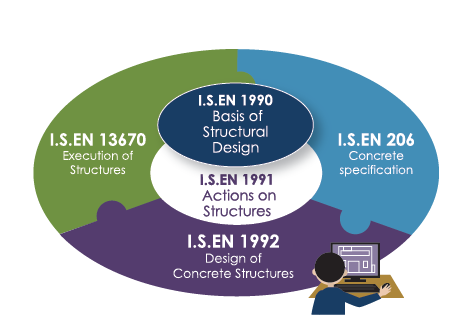 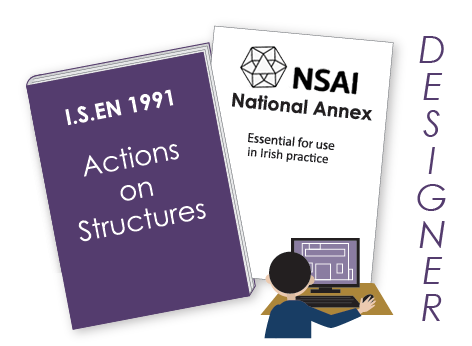 I.S. EN 1991 provides comprehensive information on all actions that should normally be considered in the design of buildings and other civil engineering works.

The other three parts deal with specialist aspects (e.g. traffic loads on bridges, actions by cranes, actions on silos and tanks)

Deals with thermal and mechanical actions on structures exposed to fire. It is to be used in conjunction with, other EN’s, for example, Fire Design parts of I.S EN 1992 Design of Concrete Structures. Part 1-2 gives general principles and application rules.

Wind Loading enables the assessment of wind actions for the structural design of buildings and civil engineering structures up to a height of 200 m. The wind actions are given for the whole or parts of the structure, e.g. components, cladding units and their fixings.

This part provides some guidance for evaluating the effects of thermal actions on buildings. Thermal actions must be considered to be variable and indirect actions.

Describes principles and application rules for the determination of actions to be considered during execution of buildings and civil engineering works, including, among others, the following aspects:

Covers accidental actions and gives rules and values for impact loads due to road, train and ship traffic and loads due to internal explosions.

Design for accidental load situations needs to be included mainly for structures for which a collapse may cause particularly large consequences in terms of injury to humans, damage to the environment or economic losses for the society.

Annex A is of special interest for buildings. Deemed to satisfy rules are presented in this annex in order to guarantee some minimum robustness against identified as well as unidentified causes of structural damage.

For the above categories different methods of analysis and different levels of reliability are accepted.

Note: Use the latest version of the standard, along with the accompanying National Annex, including any Addenda or Corrigenda updates for either, issued by NSAI. Irish Standards are available at www.NSAI.ie/standards.